Ellicottville, NY has always been a popular spot for Canadian skiers.  Ellicottville is just two and a half hours south of Toronto, two hours from Oakville and less than an hour and a half from the St Catharines/Niagara region.  For many Canadians living in South West Ontario, Ellicottville is not only closer than the ski resorts in Collingwood, it is also an easier drive.

It is perhaps no surprise then, that Canadians have been among the most avid buyers of property in Ellicottville. Approximately 30% of buyers for the Ellicottville Real Estate market are Canadian.  In the last few years,  however, that market has been greatly affected by the strength of the US Dollar and the comparative weakness of the Canadian Dollar.  In large part this has been caused by the decline in the oil price and commodity market in general.

That trend is now reversing, however as you can see from the chart below courtesy of xe.com. 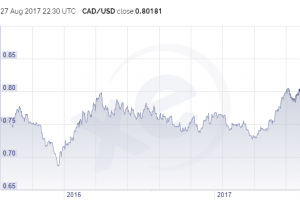 Where the currency goes from here depends on what happens to commodity prices, whether Canada can maintain its recent robust economic growth and many other factors, but for the time being, for Canadian buyers looking to secure an Ellicottville property, it’s as good a time to buy as it has been in the last two years.

For details of properties for sale at 42 Degrees North, Ellicottville, click here.

hi there I really like the blog you have set up here. Thanks and keep up the great work!

Well I sincerely liked reading it. This information provided by you is very helpful Thank you.